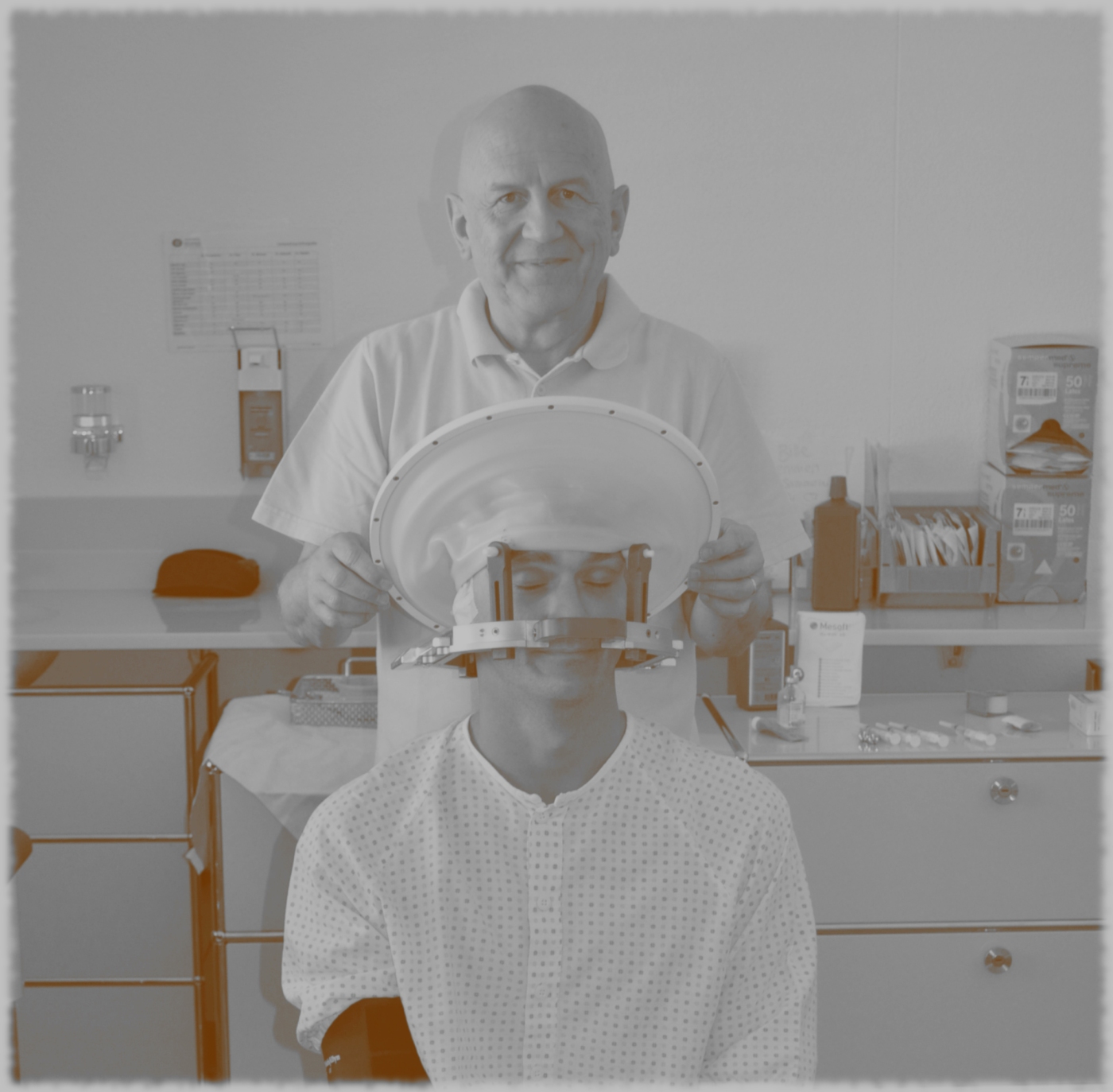 This last night I could not catch too much of a good night’s sleep. Worse: No breakfast in the following morning. Although I had enjoyed precisely those moments during the last couple of days. Not only that I was really hungry right then, some scrambled eggs with a little bit of chives on top would have been the perfect distraction – even if only for 5 minutes … or less.

But lets move the time a little forward. More precisely to 10AM when the preparation of the intervention was about to begin: Shaving my head once more – in my case not a huge effort by nature – and off to the hospital where I received a calmative and a vein access. Even though Murphy was seeking attention, the nurses did succeed after two or three stitches and could finally get the vein access installed.

Shortly before 1 pm the kickoff. First they anaesthetized 4 spots on my skull. Subsequently some kind of crown was attached to those spots to prevent my head from moving during the intervention. In spite of the anesthesia I could clearly feel the pressure. Right afterwards I was transferred to a bed onto which the crown and consequently also my head were screwed tightly. Strain in it’s purest form. From my neck down I could not stop shivering. I was freezing. Not even the many layers of blankets which the friendly staff gradually threw over me could change that.

Inside the MRT* it was not all too comfortable either: The head screwed tightly, the ears plugged and the view … left a lot to be desired. The sound of the MRT set in. A steady buzzing, clicking and hammering. You get used to it.
Before the first application of the ultrasound, a radiology assistant came in and informed me about the following steps. In the upcoming 4 hours he would visit me time and again. Retrospectively I do think that I would not have gotten through the treatment without him. Although I cognitively knew that I wasn’t alone, it was only due to those short visits that it also felt like that.

After my visitor had left the room, my moment had come – time for the ultrasound. At the beginning they did not work with full power which is why it did not feel that bad for the time being. It was when they had to turn up the energy to lesion the target area that it became difficult for me. What started with a comfortable feeling of warmth inside my head, evolved to a nearly unbearable pain within seconds. Just as I was feeling close to faint, I perceived some kind of electric discharge and the pain disappeared as fast as it had appeared before. I also described this discharge to the radiology assistant in one of his visits. If I had to put that sound in words, „Tsib“ would come closest.
This procedure should repeat itself multiple times during the following hours. A specific sequence of sounds prepared me for the painful moments. As much as I tried, I could not prevent from tensing up extremely just by hearing that sequence. Every single ultrasound-application gradually drained my energy. My energy reserve was on the edge of running out. Exhaustion or habituation – over time I perceived the pain less and less intense, I just drifted off, waited for the relieving Tsib.

After what felt like an eternity it was finally done. Being fairly moony, I was carried into my wheelchair. As the crown was being removed, the physicians explained that the intervention had been a success and that all the target points had been lesioned. They had had to fight, the physicians confessed. And that the intervention could not have been successful without my endurance. Right then the accumulated pressure of the last months fell off from me. No matter what, I had overcome it, I had done my bit. I broke down and burst into tears – face-saving, no chance.

But what is it that complicated the intervention so much? So far, no one I’ve told about the reasons could forbear to comment about my ‚pighead‘ or ’stubbornness‘: My cranial bone is supposedly above-average absorbent. No, not ‚thick‘ nor ‚hard‘ … absorbent. As a result more energy was necessary to reach the right temperature at the target points. This is also what caused the pain during the intervention. Whilst others, so I was told, sometimes even fall asleep during the intervention, I had to work for it. One cannot pick one’s skull.

Back at the infirmary I still needed help to transfer into the bed. I received pain killers for the pressure in my head and I started to doze off. Later, in a short moment of awakening, I wolfed down the provided dinner. Salmon with potatoes – lukewarm as it had already spent some time on my nightstand. My first meal within the last 24 hours. Wolfing down and enjoying don’t always contradict each other. Shortly after I dozed off again.
The night was, as it is common in hospitals, pretty uneasy. Occasionally I also had some pain attacks. Right then though I was to exhausted to really give a damn. This would change in the days and weeks to come. More about that later.

Luckily I could leave the hospital already in the next morning. The following 2 nights I would spend in the hotel. Before checking out one of the attending physicians came by and confirmed once more that the intervention had been successful. Further details were to be discussed the next day during the final examination. Ultimately he gave me some pills to prevent my brain from swelling and said good bye. Right after it was time to hurry: I checked out and went back to the hotel as fast as I could. After all the breakfast buffet would close at 10am. Today I would not miss out on the scrambled eggs.